American Craft Week celebrated in Philadelphia and all over country

This year’s official celebration will be held Oct. 3 - 12, and for the first time all 50 states are participating, including the District of Columbia, and three foreign countries (US Army bases in Germany, Japan and South Korea). A highlight among the thousands of events taking place all over the country is a national event, Spinzilla. This has been described as a “monster of a spinning event” that has been designed to raise awareness about the value of handmade craft while raising money for the NeedleArts Mentoring program created by the National NeedleArts Association.

A few of the local events featured are: Vermont celebrates American Craft Week with over 300 events all over the state including the Vermont Statewide Open Studio Tour. Maine is featuring to promote Maine Craft Weekend. Mendoco Californa combines Wine and Craft. Googleworks celebrates American Craft in Reading PA. Asheville, North Carolina celebrates with Open Studios and Food in the River Arts District. Virginia participates with its annual art show at The Mill in Edinburg that will include Open Studios, a Pop-up Art Market, and the outdoor showing of the new PBS show, Craft in America: Service.  The community is also invited to join in making a collaborative piece of art. Fargo North Dakota features flower making at the Fargo Library.  See also list of events in major markets at www.americancraftweek.com/participants

“American Craft Week has caught the imagination of so many supporters,” said Diane Sulg, founder and co-chair of the event. “With the growing appreciation of both artisan products and American-made goods, craft is highly regarded for its strong design, quality materials, expert workmanship and enduring value.” Since its inception in 2010, American Craft Week has grown from 240 to more than 1000 participating events, all inviting the general public to enjoy a wide variety of educational, commercial, charitable and festive ways to celebrate craft.

American Craft Week invites participation from every corner of the American craft community.  “The very essence of our event is to bring together everyone who is involved in craft, whether they make, sell, exhibit, celebrate, collect, or just plain love craft, to help put it in the national spotlight,” says Diane Sulg.  “You can design your own craft-centered event and become part of this national movement.” For more information, go to www.americancraftweek.com.

ABOUT AMERICAN CRAFT WEEK
The fifth annual American Craft Week will be held Oct. 3-12 in cities and towns across the nation. With hundreds of diverse events at galleries, artist studios, museums, schools, as well as fairs and festivals, it is the premier public celebration of handmade craft in America. American Craft Week is a program of Craft Retailers and Artists for Tomorrow (CRAFT), a trade association dedicated to the growth and vitality of American craft. For more information, visit http://www.Americancraftweek.com

Washington, DC
Appalachian Spring, the gallery that has brought beautiful handmade objects to the nation’s capitol for many years, is celebrating their 45th Anniversary during American Craft Week. Their celebration includes artist demonstrations, sweet treats, and “Trade Up for Handmade.” Just bring a generic coffee mug to the store and get 20% off on a new handmade mug. Appalachian Spring has two DC locations, in Georgetown and in Union Station. 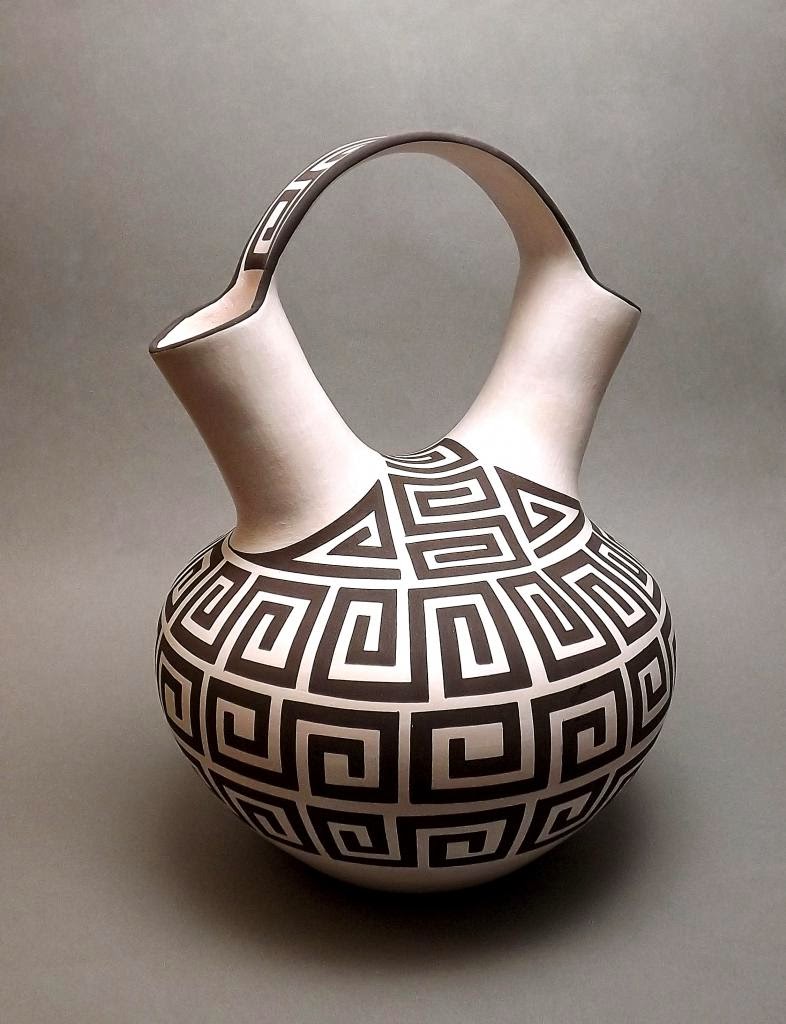 The Indian Craft Shop is maintained by the US Department of the Interior at 1849 C St. NW.  The shop represents American Indian arts and crafts from across the US, including jewelry, pottery, fetish carvings, beadwork, weavings, basketry, sand-paintings and sculpture. The knowledgeable staff can tell you about the native traditions behind each piece and show you work representing all levels of craftsmanship from emerging artists to the very well-known.

Heart of the Home Gallery, 28 S. Main St., New Hope, PA
If you want to enjoy a fall drive from Philadelphia, consider the picturesque borough of New Hope which lies on the west bank of the Delaware River.  Here you’ll find Heart of the Home Gallery.  For American Craft Week they are presenting a trunk show with Connie McIndoe of Hopewell Pottery.  Her nature inspired work will be on display October 4, 5 & 6. 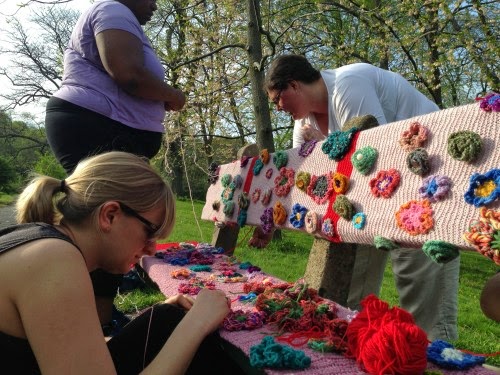 Eliot School, 24 Eliot St., Jamaica Plain, October 5, 6 pm
Bust out your knitting needles and unravel an experience unlike any other! In conjunction with American Craft Week, the Eliot School of Fine & Applied Arts presents Yarn Bombing, a fun and unique way to express creativity by embracing the urban environment. Participants will attend a talk and demo with JP Yarn Bombers, and learn about the process of executing stealth art in public places. Come and hear about their artistic adventures, see examples of their work, and partake in a little creative mischief yourself. All are welcome! 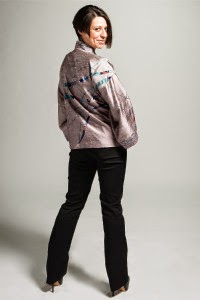 Western Avenue Studios, 122 Western Ave, Lowell
Wearable Art Extravaganza at Western Avenue Artist Studios: from the mild to the wild. Artists from all media will be creating and showcasing wearable art. Attendees will see everything from traditional clothing and earrings, to drag queens, all in “wearable” art. This event will raise money, through your generous donations, for children impacted by HIV/Aids. The event will begin at 6:30 pm following open studios and the artist reception in the Loading Dock Gallery. Cash bar and refreshments will be available. Suggested donation is $10 per person, $15 per couple. 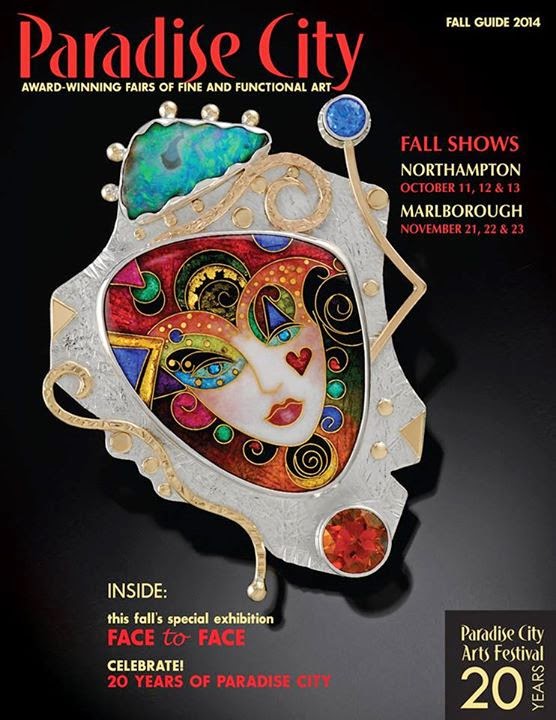 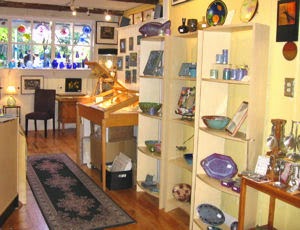 Valerie’s Gallery, 26 State Street, Newburyport
Visit this historic seaport town north of Boston and make sure you stop in at Valerie’s Gallery, one of the area’s fine galleries of handmade American craft.  During American Craft Week, October 3-12, they want to improve your beverage service.  Just bring an old, mass-produced mug into the gallery, and they will exchange it for 20% of a new American hand-crafted beauty.

Posted by American Craft Week at 11:44 PM No comments: 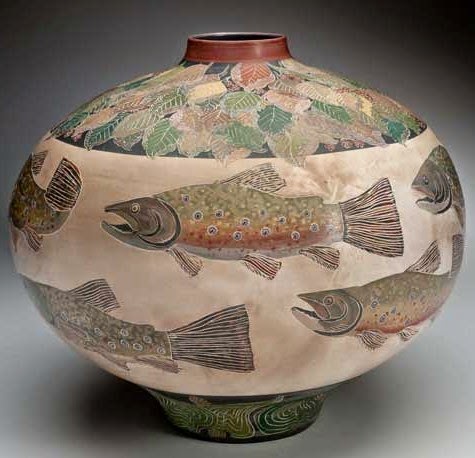 1. Meet the Potters of Deer Isle, Maine
If you are in Maine the second weekend of October, you will be surrounded by Maine Craft Weekend, held Oct. 11 & 12.  This American Craft Week event showcases Maine artisan crafts and breweries with open studios and special events throughout the state.  One scenic recommendation is to visit the potters on Deer Isle.  At the Greene Ziner Gallery you will see the exquisite work of potter Melissa Greene as well as the forged iron furniture of Eric Ziner and the work of other local craftspeople.  They are located in a gorgeous 1820’s post and beam barn at 73 Reach Road.  (For more info look under Maine at www.americancraftweek.com/participants )

2. Glassblowing with John Chiles in Orwell, VT
First off, we must tell you master glassblower, John Chiles, makes gorgeous glass. And it’s created in an idyllic setting, a rustic barn in the scenic Vermont countryside. As part of American Craft Week, he is giving demonstrations on October 4 and 5, and even more exciting, he will assist both adults and children in making their own glass holiday ornament. His studio is located at 690 Rte 73, in Orwell.  Learn more at www.americancraftweek.com/vermont

3. Wine Country Craft, Mendocino, CA
With its official celebration, “Mendocino County Celebrates American Craft Week”, this beautiful part of California is alive with the arts.  Touring the wineries?  On Oct. 3-5, at  Hadley Cellars in Philo you will be treated to delicious wine and food pairings., On Oct 12,  come to meet Monika Schulte Bisping, owner of the Bird House, exhibiting her handmade ceramic creations. Learn more at www.americancraftweek/mendocino

4. Arts Festival Reading at Goggleworks
If you haven’t been to Goggleworks in Reading, PA, put it on your bucket list!  Named for the safety glasses which were once manufactured there, it is one cool arts place. On October 4 and 5, the Reading Arts Festival is there along with more than 30 open artist studios, hot glass demonstrations, music and more. This is a beautiful juried show in a very fun place. More info at www.americancraftweek.com/participants and www.goggleworks.org.

5. River Arts District, Asheville, NC
If you would like to see more than 170 working artists, head to the River Arts District in Asheville. On Saturday, October 11, there are open studios, demonstrations, activities and restaurants all housed in 22 former industrial buildings in this great city for the arts.
Learn more at www.americancraftweek/wnc

6. Annual Art Show at the Mill,  Edinburg, VA
Would you like some history with your art?  Then come to the Edinburg Mill. Originally built in 1848, the mill was in continuous operation as a grist mill until 1978 and is one of the few mills  NOT burned by Sheridan during the Civil War. Now a museum and visitor center, the mill features art and craft by Shenandoah artists from October 11- 19. For more information, look under Virginia and Shenandoah at www.americancraftweek/participants.

6. American Craft Week at the West Vliet Street Distict, Milwaukee, WI
The studios and galleries in this creative district have joined in a celebration of Milwaukee-made art and craft.  Free events on Oct. 3 and 4 include Open Studios, a Pop-up Art Market, and the outdoor showing of the new PBS show, Craft in America: Service.  The community is also invited to join in making a collaborative piece of art.  Complete info at: www.salvagedstudio.com 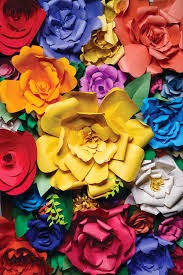 8. Flower Making at the Fargo Library, Fargo, ND
The Fargo-Moorehead area is gearing up for a large American Craft Week celebration. one fun activity for both adults and teens is whimsical flower making at the library. These lovely blooms can be made in any style and color to decorate gifts, parties, and more! Program is offered Oct. 6 and 11.  For details check under North Dakota at www.americancraftweek/participants 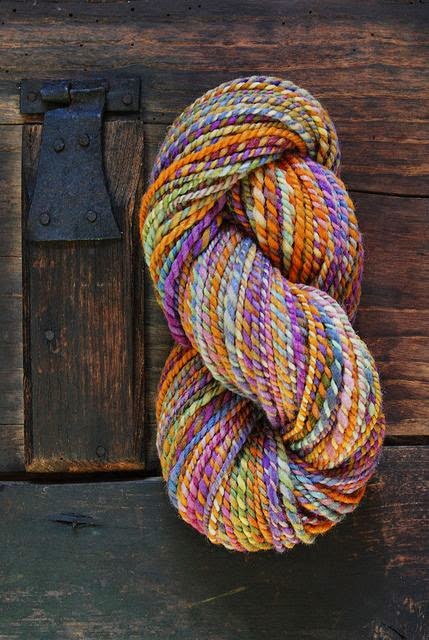 9. Spinzilla, Nationwide, USA
Spinzilla is a “monster of a spinning event” where competing teams and individuals challenge each other to see who can spin the most yarn in a week! Spinzilla 2014 will be held October 6  through 12. In 2013, Spinzilla's first year, over 600 spinners spun nearly 1.4 million yards of yarn. This year, there are over 1,000+ registered spinners, so the hope is for enough yarn to go coast-to-coast. The program is a fundraiser for the NeedleArts Mentoring program.  Look for more info at Nationwide events, www.americancraftweek.com/participants.

10. Wikipedia Edit-A-Thon, American Craft Council, Minneapolis, MN
Help update our knowledge and information about America’s women artists. Come to the ACC’s Wikipedia Edit-A-Thon during American Craft Week to focus on adding information about female craft artists to Wikipedia.  It will be held Saturday, October 11, from 10 -3. at the ACC Library, 1224 Marshall St. in Minneapolis. It is free, with refreshments, and you are invited to attend for as long as you like.  More info: http://craftcouncil.org/event/art-feminism-wikipedia-edit-thon.

Posted by American Craft Week at 11:34 PM No comments:

Madison, WI – 2014 marks the centennial celebration of the Madison Art Guild.  Join us in celebration of inspiring art and artists in the Madison area on October 10th from 5p-9p, at Café Zoma, 2326 Atwood Ave. This exhibit will highlight 10 members and is presented in conjunction with the Madison Museum of Contemporary Art’s Gallery Night and American Craft Week (October 3-12, 2014).

Please join us in celebration of this momentous occasion for the Madison Arts Guild and the member artists. Enjoy live music by Phoebe Frenette and Friends and light refreshments will be served during the reception.  The exhibit will run October 6th – November 1, 2014.

What Is American Craft Week?